Grade in the ST Evaluation Program

Click here for more info about the licence type >>

“The story of how I found Straightness Training? It’s actually the story of my horse Ciaran; he was my first horse, and this is what happened:
‍‍‍‍ ‍‍‍‍
Sometimes you just love a horse, even despite his challenges.
‍‍‍‍ ‍‍‍‍
When I met Ciaran for the first time, I immediately felt that he was my horse. He was beautiful and healthy, just 3 years old, but there was a bit of a catch…
‍‍‍‍ ‍‍‍‍
Physically, he was very heavy in his shoulders, had pushy hind legs, and could not bend nor turn; he went through corners like a wooden shelf would do.
‍‍‍‍ ‍‍‍‍
Mentally/emotionally seen, well, he showed an interesting combination of being a bit withdrawn while at the same time, he could suddenly explode and run. When he spooked or felt pressured (and he had a very low threshold), he would tear himself loose and even break through fences.
‍‍‍‍ ‍‍‍‍
I loved him anyway but still, the truth is:
‍‍‍‍ ‍‍‍‍
In the first years that I had him, I’ve shed a lot of tears.
‍‍‍‍ ‍‍‍‍
I often felt like a worthless horse trainer, ashamed about his behavior, and many times I felt desperate about our lack of progress. While others were riding their horses with ease, I watched my horse galloping in a straight line into the pasture because I had tried to lunge him and he ran off again, demolishing all the fences he met on his way out.
‍‍‍‍ ‍‍‍‍
I started with groundwork – which was very unusual at that time – and it took me years before I could ride him. Others didn’t understand what I was doing and always kept asking when I finally would ride him and do some ‘real’ training. It was a lonely feeling.
‍‍‍‍ ‍‍‍‍
What felt most painful though is that at one point, I could see that Ciaran was not really enjoying our training sessions. He still was not balanced in his body and his mind, so I needed to do something but I just didn’t know what. I felt incapable, stuck, and just not good enough.
‍‍‍‍ ‍‍‍
I dreamed of making long harmonious trail rides with him, and I also wanted to school him so he got fit and strong enough to do the piaffe one day. I always kept these dreams in my heart, no matter what others said and what the reality looked like.
‍‍‍‍ ‍‍‍
My dreams pushed me on a journey to become a better horse trainer every day.
‍‍‍‍ ‍‍‍
When I was looking for trainers to learn from, I found Marijke’s website. I loved the way she explained things; it had such clarity that I never had seen anywhere else. In 2010, I enrolled in Marijke’s first online program.
‍‍‍‍ ‍‍‍
I was hesitant at first because I believed I could not really afford it but I thought “let’s just do it for one or two months, learn loads, and then quit again”.
‍‍‍‍ ‍‍‍
I never left.
‍‍‍‍ ‍‍‍
Ciaran passed away in March this year, 25 years old.
‍‍‍‍ ‍‍‍
The change I was able to make with him thanks to Straightness Training has been incredible. We have made countless trail rides and I could ride him everywhere with just a simple rope halter. He became very strong and balanced. He turned with ease, was able to show all lateral movements, and could collect himself in walk and trot. We never made it to the piaffe but we came very close as he could show some very nice half steps.
‍‍‍‍ ‍‍‍
Instead of running off, he had learned to stick with me, even without a line. He never braked through fences again and I always received compliments on how well-mannered he was. He enjoyed our training sessions, was very open, and always gave his best in the arena. In his last years, I could even ride him without any reins.
‍‍‍‍ ‍‍‍
ST supported me to help Ciaran, and then, dreams started to come true.
‍‍‍‍ ‍‍‍
In 2015, I got certified as an ST Instructor. By now, I’m also an ST Evaluator and Academy coach. Plus, as a Mentor Instructor, I support the trainees in our Basic ST Instructor Certification Program (BCP) on their journey toward certification.
‍‍‍‍ ‍‍‍
The last days of Ciaran’s life, there was only love and a deep yet natural understanding between us.
‍‍‍‍ ‍‍‍
With the support of Straightness Training, we’ve had such a meaningful life together.
‍‍‍‍ ‍‍‍
And this is something that I wish for every rider and every horse. It’s why I became an ST Instructor, so I can support others to get there, too. Ciaran keeps being an inspiration when I’m coaching my students and Scholars, and when you are currently struggling with your horse, I hope his story can give you some hope, too.
‍‍‍‍
Hold on to your dreams, there is so much possible.” 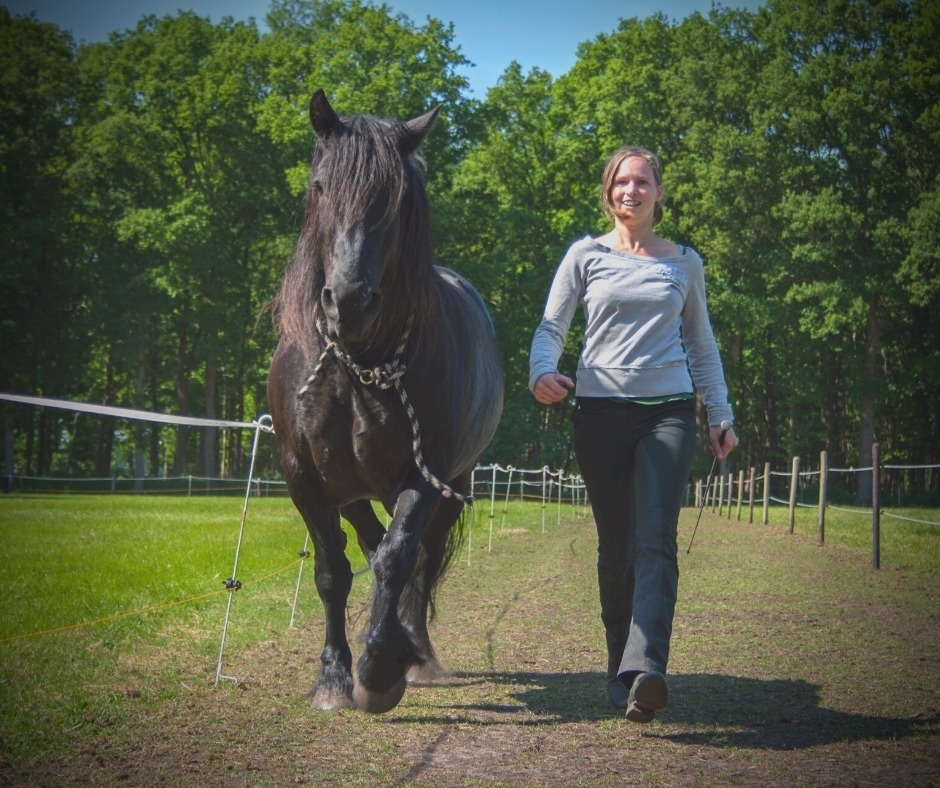