Luis Valença is seen as one of the world’s greatest living riding masters of Portugal. Reason enough to visit Luis Valença at his Centro Equestre Da Leziria Grande in Portugal. 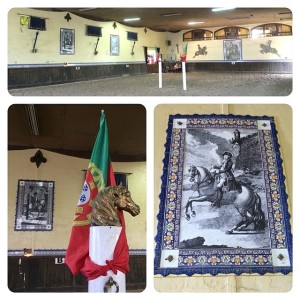 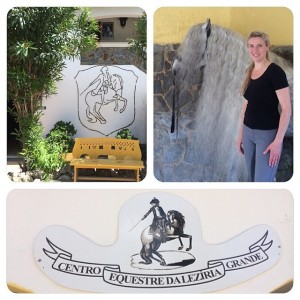 Study of the Old Masters

For over 10 years , I have been studying the old masters including Antoine de Pluvinel (1552-1620), François Robichon de La Guérinière (1688-1751) and Gustav Steinbrecht (1808-1885). I believe that by unraveling, integrating and complementing their sparsely documented knowledge, the ideal of the Centaur can be achieved: two souls and two bodies merge into one in harmony and beauty. The key to this is to consider dressage as an essential tool for achieving this ideal. This means that dressage exercises themselves are not the goal.In this context, I developed a structured and accessible method which I have called Straightness Training. I am deeply convinced that the concepts, training parts and exercises that are part of straightness training, will make the Centaur ideal more accessible for everyone who thinks first and acts later. It is my mission to make my knowledge about Straightness Training as widely available as possible. By doing so, other riders can realize the Centaur ideal more effectively and in less time. Subsequently, if these riders pass on this knowledge to others, I can make a contribution to improving the quality of life of many, many horses. By working together with self-thinking and empathetic riders we can give something back to horses, that are constantly giving so much to us. 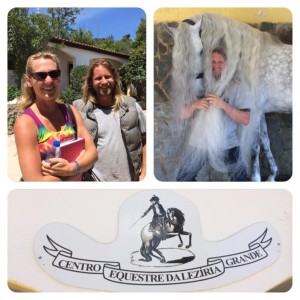 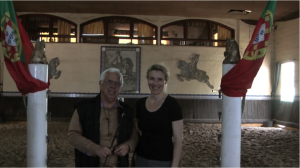 I'm always looking for "echoes" of the wisdom of the old masters of the past, so when I had the rare privilege of training a week with Luis Valença, together with Rupert Isaacson and Iliane Lorenz of the Horse Boy, I didn't doubt for a second.

Luis Valença has a tremendous track record and this curriculum on his website gives a good overview of his impressive career:Curriculum Vitae Luis Valença >> 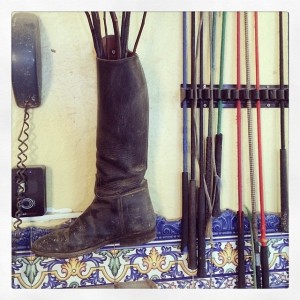 Luis Valença is an impressively wise and kind man. He is very hospitable and very generous in sharing his knowledge and experience, and so are his daughters Filippa and Sofia.Luis Valença was really close to Nuno Oliveira for over 20 years and by training with him Icouldwitness some "echoes" of the perfectionism and the wisdom of Oliveira. During the week I was able to witness some of the spirit and ideas of Nuno Oliveira and François Baucher while training inLuis Valença's riding arena. There's even a riding boot from Nuno Oliveira on the wall which is now used as a whipholder. 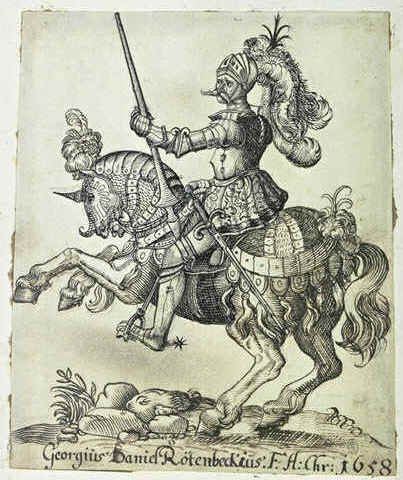 At the Valença Equestrian Center the authentic Portuguese equitation is still practiced and taught, and Luis Valença's way of training between the pillars and the high school exercises is unique. I also delved into the art of riding of the Portuguese bull fighting tradition. Note that I am absolutely not in favor of bull fighting and the inevitable animal suffering that goes along with it. However, I do appreciate the art of riding that derived from it.The same applies to the art of riding that arises from man to man fights. All contemporary dressage exercises, from shoulder-in to the high school exercises, find their origin in preparing horses for war. This was reflected in the battles of man to man, where even kings on horseback battled against each other. 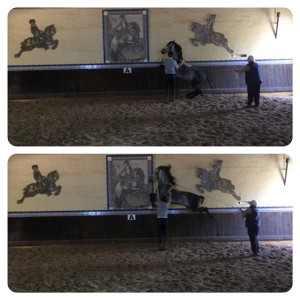 The capriole was used to eliminate the opponent with the power of the kick of the hind legs. A courbette was done to impress or to dodge an attack. Also canter pirouettes were deployed to turn quickly during the fight to escape the enemy or the bull.A well trained, agile and loyal horse would make the difference between life and death. The more agile and powerful the horse, the better the combination of horse and rider was able to 'survive' . Only through many years of schooling these horse were able to reach this level of war horses. Of this "goal oriented" art of riding all dressage is derived, including Straightness Training. But again, for the record, I am neither in favor of bull fighting nor war, but I do appreciate the art of riding that arised from it. Fortunately, in the Baroque period a movement emerged, based on the principle of L'art pour l'art, where the art of riding was considered as an art form in itself. This way of riding was all about the artistic beauty of riding and not meant for war anymore. So now the art of riding was freed from its original purpose, but was not alienated from its original principles. During the 19th century, the art of riding became alienated from its original principles because of industrialization and the changing nature of warfare with guns and canons. Also the breeding changed, with a shift from more square horses with carrying capacity and ability to collect, to more rectangular bred horses who possessed mainly thrust and speed, and less maneuverability. The Frenchman François Baucher (1796-1873) and the German Gustav Steinbrecht created, both in their own way, their own particular method to be able to train these more rectangular shaped horses according to the ancient principles.

Discussing Baucher versus Steinbrecht, this has led to several, almost "religious conflicts" in the past, because of their different approach in training horses. 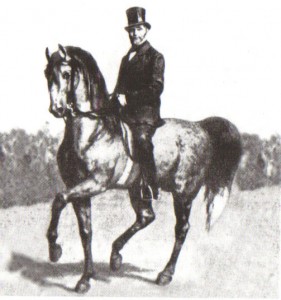 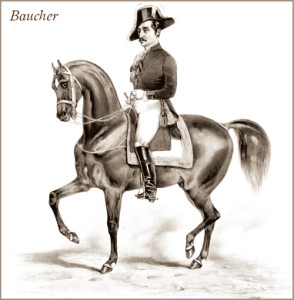 The Portuguese art of riding uses ingredients of the ideas of Baucher. People that know me and Straightness Training, know that I am a strong advocate of the ideals of Steinbrecht. 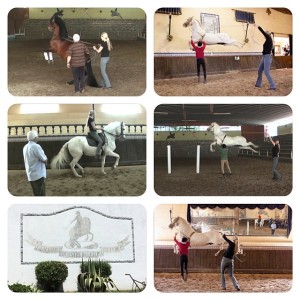 But this did not withheld me to immerse myself totally in this for some seemingly contradictory approach during my stay at the Valença's. It's my believe that only by experiencing  alternative visions and methods first hand, a well based opinion can be formed. Only this way you can really experience and feel the concepts and techniques of Valença, Oliveira and Baucher. During mystudy of the old masters, I never try to be omniscient, but always have the attitude of a novice rider. I try to prevent immediately comparing different approaches with my own concepts, ideas and ideals. Usually it turns out that my "total immersion" in a partly different approach leads to a clearer, stronger and purer definition of my own method, Straightness Training. I also discovered that every meaningful horse trainer has its own signature. A great horse trainer can never be labelled with a cliched view of some specific riding movement and he's never just a copy of his teacher(s). He or she always adds something new and permanent to the art of riding and develops his own unique artistic way of training horses, so did Luis Valença.

The training components of Luis Valença

During my visit, Luis Valença talked extensively about the background of all training components they use at the Valença Equestrian Center to train their beautiful horses:
• Longeing
• Work in hand
• Riding
• Long lining
• Pillar work
• High school
• The art of fighting

Full of enthusiasm and dedication he demonstrated all training components: 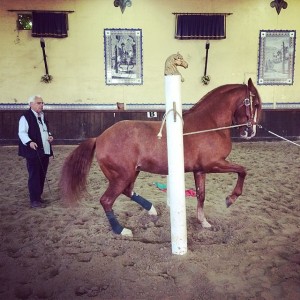 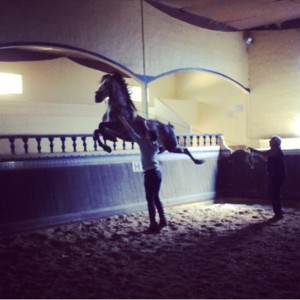 The exercises he uses are the circle, shoulder-in, haunches-in, renvers, half-pass, pirouette, piaffe, passage, spanish walk, levade and the high school jumps and more: He also mastered the typical Baucheristic exercises with his famous horse Sultão, like canter on the spot, canter backwards, and the Spanish walk backwards. After several theoretical explanations and demonstrations, I was allowed to work with his horses under his supervision: 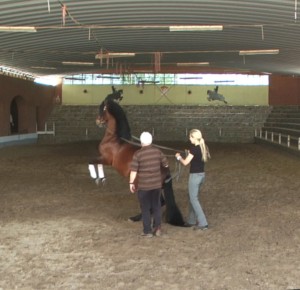 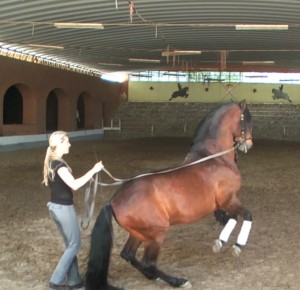 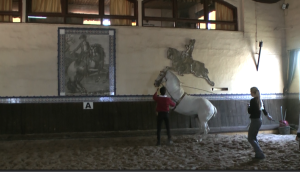 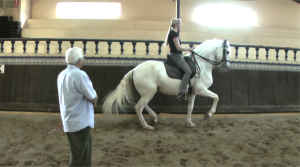 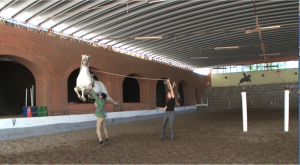 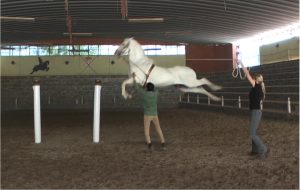 Just like Luis Valença and his daughters Filippa and Sofia, his Lusitano and Arabian stallions I was working with, were very generous in sharing their expertise, for which I am extremely grateful!Through the explanations, demonstrations andlessons of the Valença's I received athorough and complete overview ofhis way of training and schooling horses. This uniquetraining weekhasresulted in even more motivationto continue with even greaterenergy and commitmenttorefinemy Straightness training method and to keep developing it. As always, Iwould like to sharemy experience with you, and in this videoyou will see animpression of myexciting weekin Portugal.