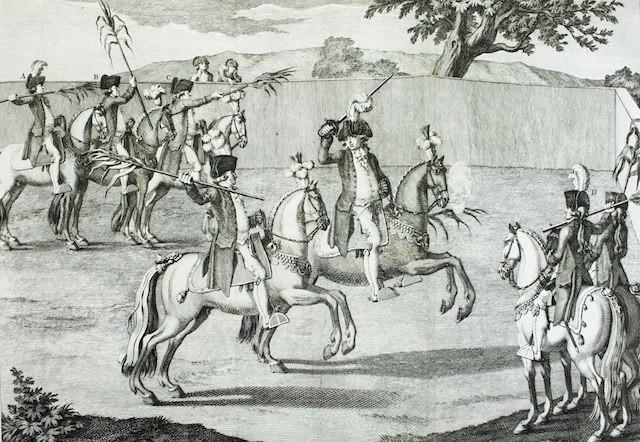 Manoel Carlos de Andrade (1755 – 1817) was a pupil of one of the most well-known and most respected riding masters of his time: 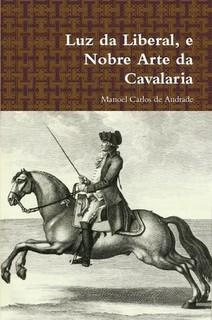 In the book, De Andrade described the views and teachings of his teacher but also compared these with the teachings of:

De Andrade’s book gives a detailed overview of the horsemanship of its time, but also teaches everything about the horse – from behavior, anatomy, medicine, breeding, to equipment and tournament organization.

“Luz da Liberal, e Nobre Arte da Cavalaria” was published in 1790, and nowadays it’s the most significant work and a sort of “Bible” of classical Portuguese riding.

Besides an impressive riding history, Portugal has a special history of the art of tiles as well. 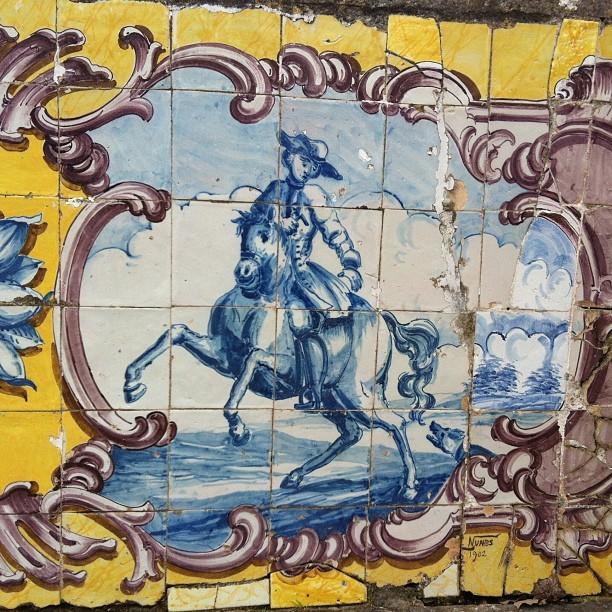 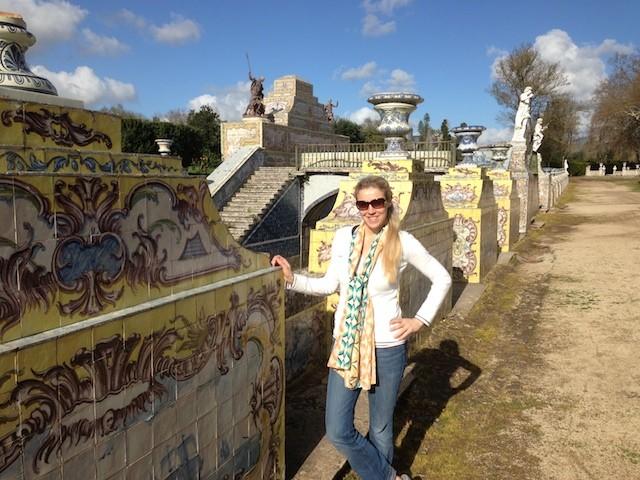 Portugal has a beautiful tradition of colorful tiles – “azulejos” in Portuguese, it means “small polished stone”.

Almost every building in Portugal is decorated with tiles, and some date back centuries!

Tiles are originally from Egypt, but they were brought to Portugal by the Arabs, in the 13th century.

So they are a huge part of Portuguese history and culture.

The production of tiles is very specific, and its main characteristic is the longevity it offers to the final product.

Initially, all these tiles would be cut into geometric shapes and painted with very neutral tones.

At the pictures to the right and above this paragraph, azulejos tiles line the walls of a canal in the gardens of the Queluz National Palace.

The Queluz National Palace is a Portuguese 18th-century palace located at Queluz, a freguesia of the modern-day Sintra Municipality, in the Lisbon District.

More than 100 metres (330 ft) long, the walls of the canal are decorated with tiled panels depicting seascapes and associated scenes.

In Portugal, most of the tiles you find, combine the colours white and blue.

These predominant colours were considered very fashionable at the time of the Age of Exploration (15th to the 18th century). This was the time when Portuguese and other Europeans began exploring the world by sea in search of new trading routes, wealth, and knowledge.

Initially, Portuguese tiles were only bought by wealthy families and used inside most buildings.

Over time, the tendency was to use them in every building’s construction.

The blue colour was seen as a synonym of power and wealth, so you can easily find them on valuable monuments all over the country.

Plus, the colours are also associated with oriental porcelain and have a Dutch influence (“Delft’s Blue”). 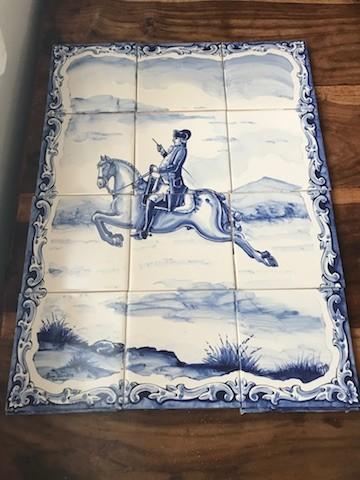 When we stayed in Portugal in December 2012, we visited a delightful Portuguese town called Sintra.

In Sintra, there are a lot of stores which you can visit and find hand-painted Portuguese tiles to buy.

In one of those stores, we stumbled upon two sets of 12 tiles with pictures from the book of De Andrade.

We bought them, took them back home with us to the Netherlands, but we never found this special occasion to use the tiles.

We had ideas, but we thought the tiles were too precious to use them, for example, on an ordinary groom and wash stall.

So after waiting for 5 years in the original package, the tiles moved back to Portugal with us in 2017.

But it was not until the beginning of 2019 before they found their final destination: our brand new barn! 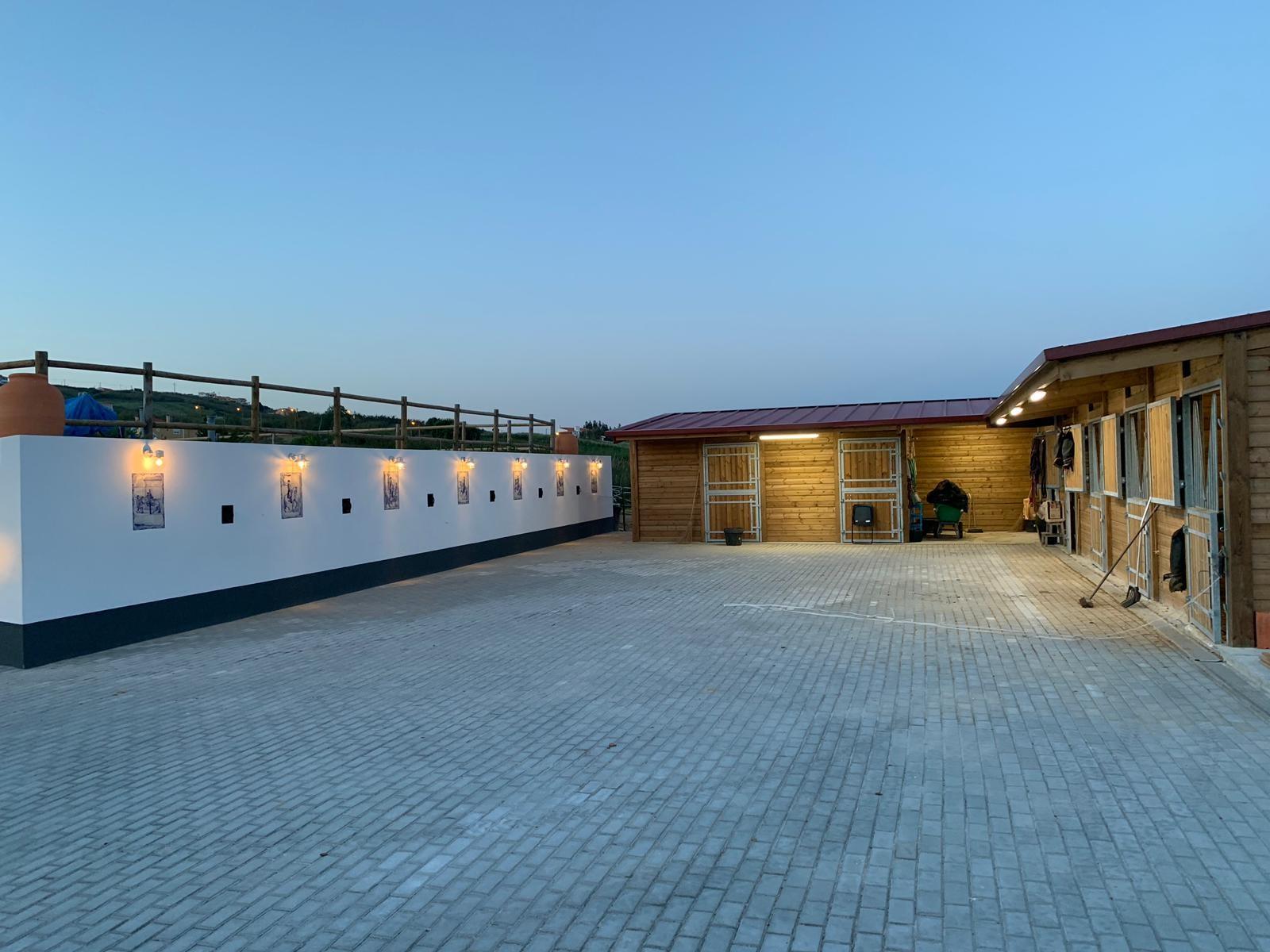 With the help of our wonderful architect Helena Morais we managed to find the original tile artist.

And he was willing to paint and create an additional 5 sets of 12 tiles with some of the paintings in De Andrade’s book. 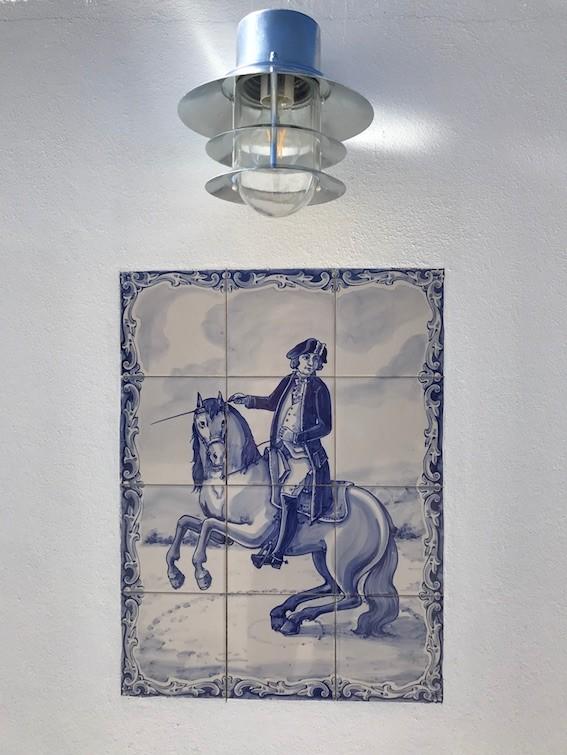 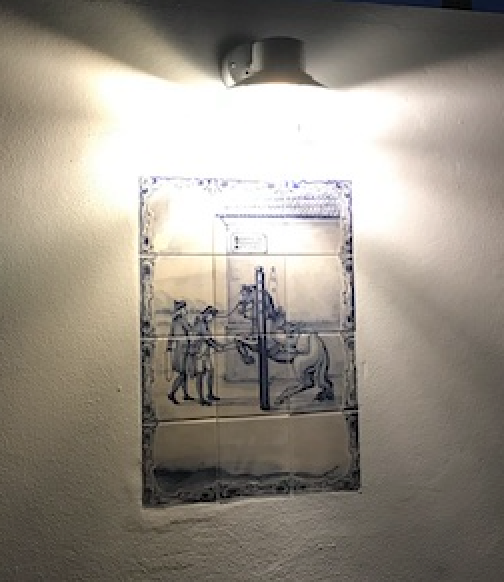 Hold the Vision, Trust the Process 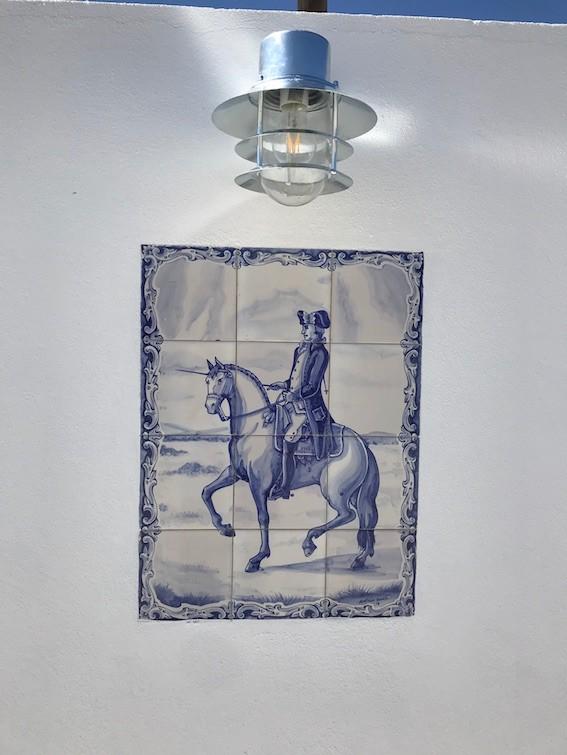 We always knew and felt that one day, there would be a special destination for the tiles.

And when it comes to the pictures on the tiles, they encourage the ideal which is often not easily attainable – it’s not easy, but it’s not impossible.

“Whatever we plant in our subconscious mind and nourish with repetition and emotion will one day become a reality”,  Earl Nightingale says, and I strongly believe this.

So hold the vision and trust the process:

The highs and the lows are all ours to make the most of.

Just hold the vision, trust, and enjoy the process! 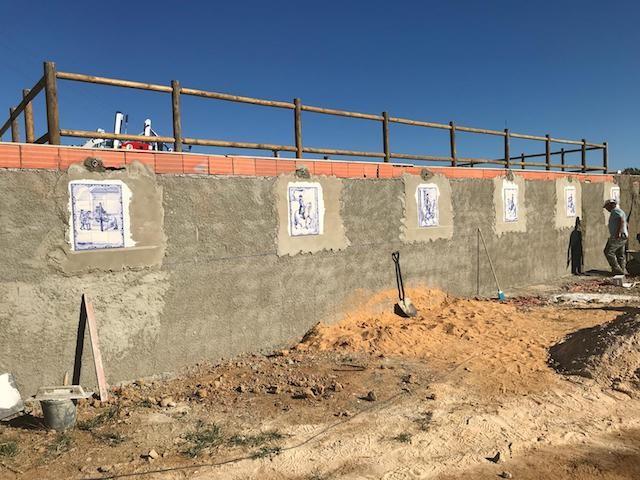 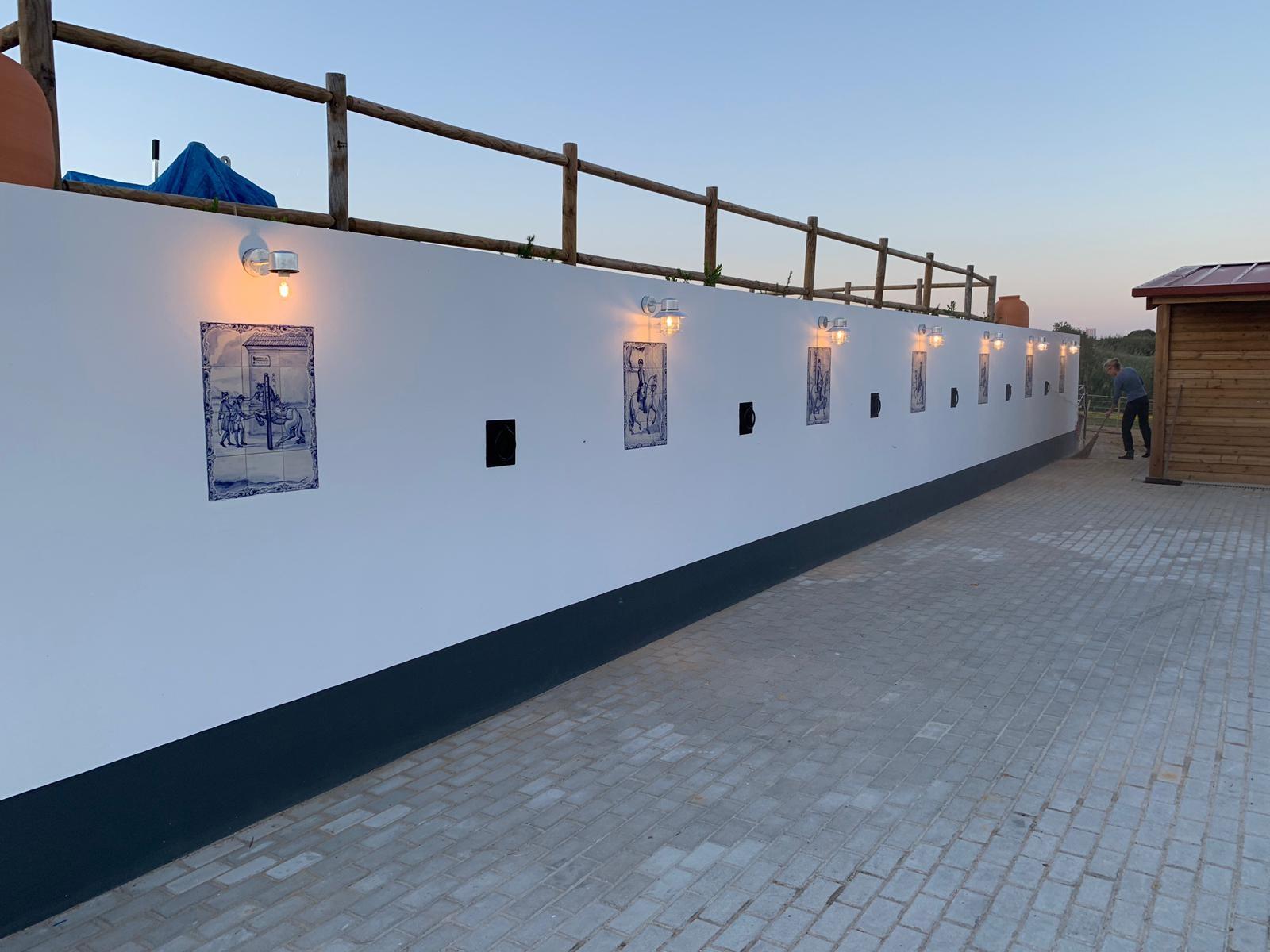 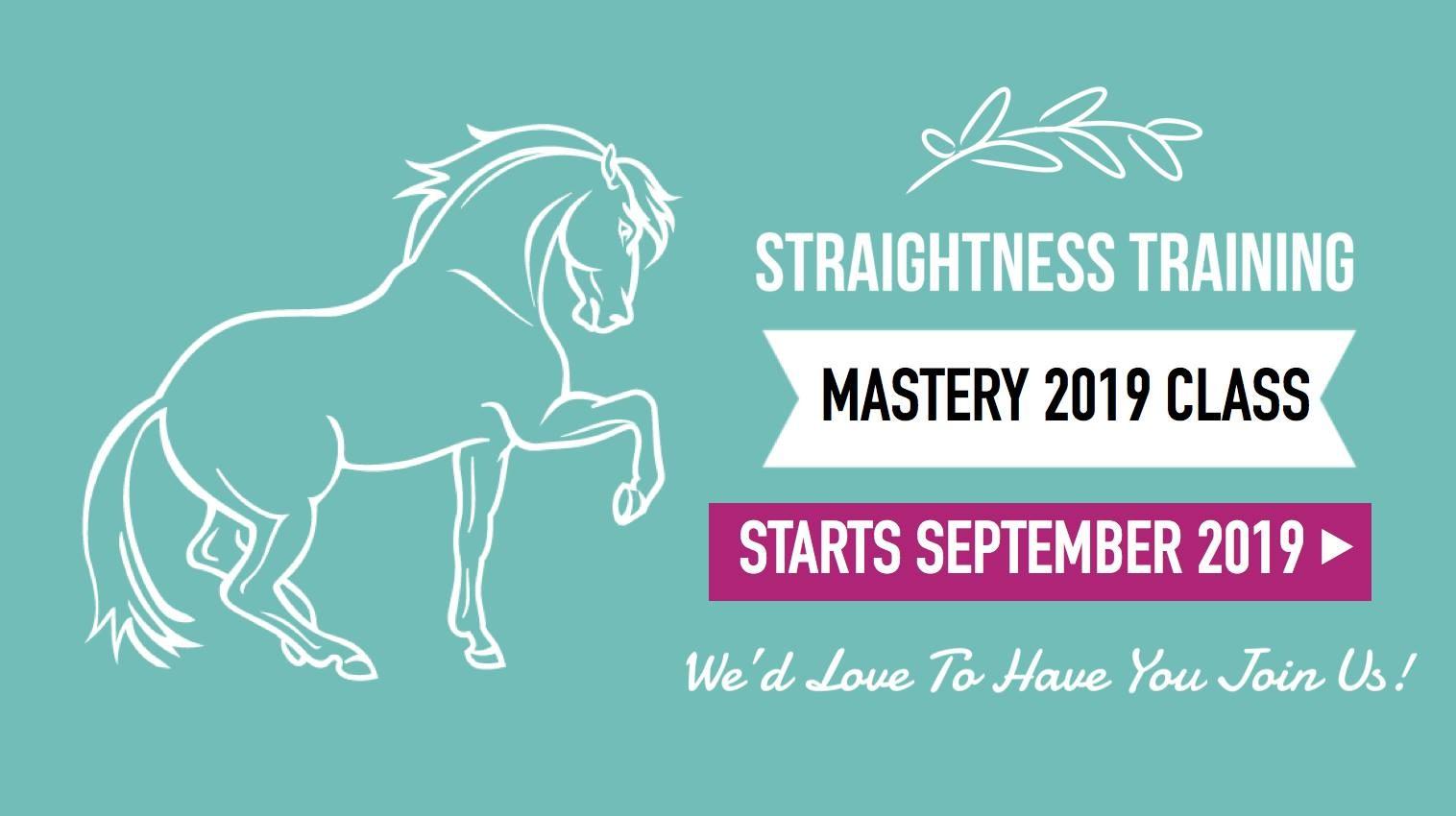