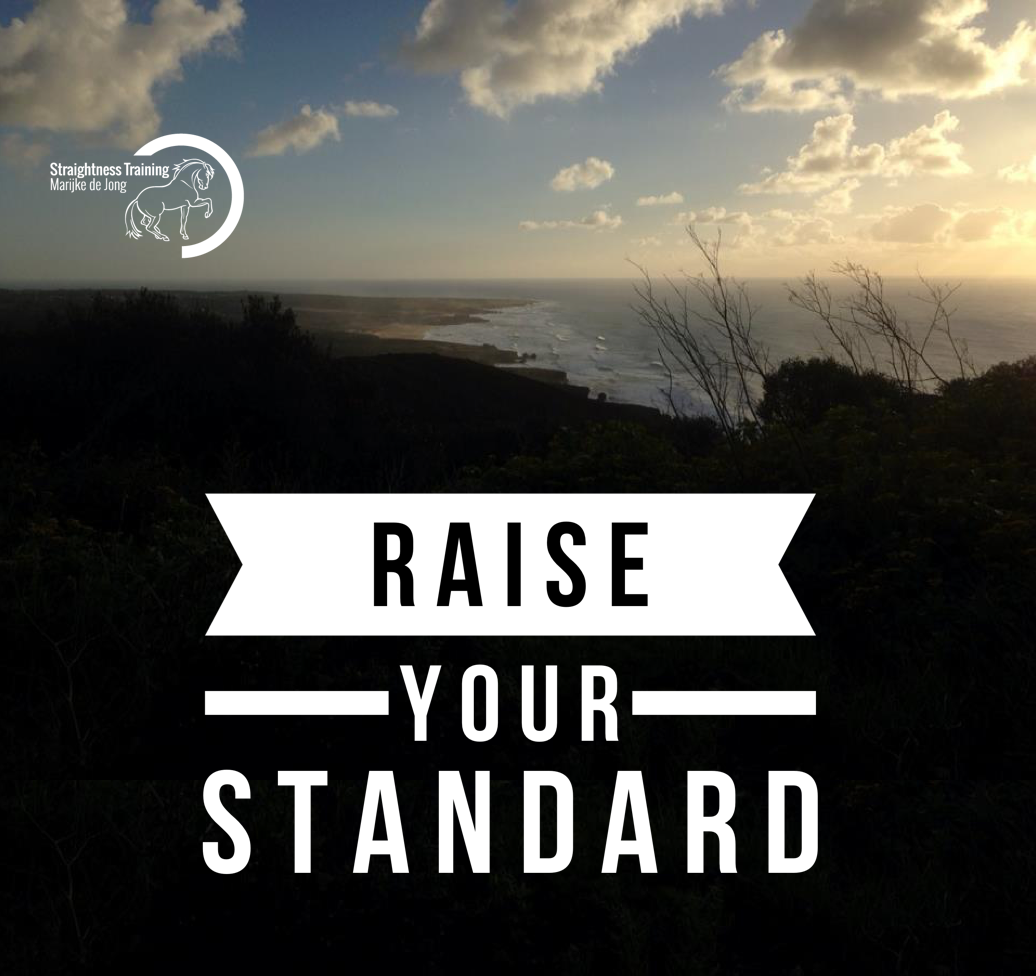 ‍‍
The ability to raise your standard!
‍‍ ‍‍
So what does it take to takes things to the highest level?
‍‍ ‍‍
What does it take to change your life and horsemanship permanently?
‍‍ ‍‍
Not temporary?
‍‍ ‍‍
You need to have a higher standard!
‍‍ ‍‍
You need to have a higher expectation of yourself!
‍‍ ‍‍
Not of your horse…
‍‍ ‍‍
Not of somebody else…
‍‍ ‍‍
Not of the environment…
‍‍ ‍‍
But of yourself!
‍‍ ‍‍
Whenever you look at somebody and think:
‍‍ ‍‍
“Why are they more successful than anybody else?”
‍‍ ‍‍
It’s always because of “step 1”:
‍‍ ‍‍
They raised their standard!

What does that mean?

‍‍Well, we all get what we tolerate.
‍‍ ‍‍
In ourselves and other people.
‍‍ ‍‍
But when you no longer willing to tolerate something, that’s when our life changes.
‍‍ ‍‍
So the difference in people is their standards.
‍‍ ‍‍
What do we mean by standards?
‍‍ ‍‍
Well, everyone in the world has a list of what they think they should do.
‍‍ ‍‍

But you know what?
‍‍ ‍‍
People don’t do their shoulds!
‍‍ ‍‍
And when they don’t…
‍‍ ‍‍
They often feel bad 😖, sad 😥, or get mad 😤 at themselves.
‍‍ ‍‍
They beat themselves up about it.
‍‍ ‍‍
So…

What changes people is when their SHOULD, becomes a MUST.

When suddenly, the thing they said should happen, HAS to happen.
‍‍ ‍‍
That’s when human beings change.
‍‍ ‍‍
Don’t tell yourself:
‍‍ ‍‍
“That’s just who I am”.
‍‍ ‍‍
It’s like, if you’re the head of the army…
‍‍ ‍‍
And you want to take the island…
‍‍ ‍‍
The most powerful way to take the island, is to burn the boats.
‍‍ ‍‍
Because if there’s no way to go back, it’s amazing what happens when it’s a MUST to do something vs a SHOULD.
‍‍ ‍‍
So raise your standard!
‍‍ ‍‍
That’s what makes you succeed!

When you think you should do this, or you should do that somewhere this year…
‍‍ ‍‍
Don’t you think it’s time to raise your standards NOW?
‍‍ ‍‍
Just turn your SHOULDS into MUSTS and set a new standard!
‍‍ ‍‍
And the ST Entry Course will help with that >>

0 thoughts on “Raise Your Standard”