Tools or no tools?

Oftentimes people ask me: can you also do it without a whip? The answer is: Yes, you can! You don't need to use a whip, as you can see in the video, but I prefer to. 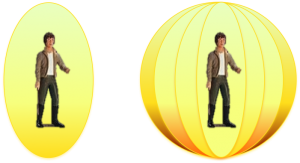 Because horses walk on four feet and we walk on two feet, therefore horses are more 'horizontal' and we are more 'vertical'. And with a whip I can make myself as long, as horizontal as the horse, I can extend my energy bubble because of the whip. I can use the whip as an extension of my arm and energy, so I can communicate in a refined and clear way. And in certain settings I use two whips, sometimes with equal length, sometimes with different lengths; some are 4" (100 cm), some are 6" (200 cm), some are 12" (300 cm).

It's always the human behind the tool

It's always te human behind the whip who brings a whip fully alive. Therefore you ARE the whip. Whips don't become energy, until you touch it. So it's not a matter of 'tools yes or no', rather a matter of mastering our own energy and emotions when touching and using tools. Because also a normal halter, simple line, cordeo and other tools that are described as 'horse friendly' can be used in a harmful way when a human is feeling frustrated or stressed or when he's losing sight of the essence. Therefore if we start to judge whips, we should judge the human in the first place 😉

And we should not judge a whip in order to try to make ourselves seem more kind and loving to our horse. It doesn’t matter what we think is 'horse friendly', but how the horse feels about it. Because if you use the whip correctly, if you use it as an extension of your arm and energy, it does no more harm than it would lying on the ground. And a human making a lot of 'noise' with his own body and arms to make himself understood might cause much more confusion in the horse's mind as somebody who uses the whip as a conductor would do to make refined music.

Thinking that it's about the whip makes us narrow minded, you always need to see the Bigger Picture when a whip is used;

● What's the emotional state of the rider? Does he feel angry, defiant, hurt, worried, stressed? Or does he feel thankful, relaxed, playful and helpful?

● What is the quality of the relationship and bond between rider and horse?

● What kind of training style is the rider using? Is he more a 'coach' for his horse or is he very 'bossy'?

● Does the rider use the whip with feel and in an organical way, or in a technical, mechanical way?

● Is the rider very task and goal oriented or more horse oriented, i.e. is he putting the needs of the horse first?

● Is the rider not losing sight of the essence while training his horse?

So it's not about the whip, it's about how the whip is used by the human in the Bigger Picture. Now applying an 'avoidance' strategy is a valuable 'short term' option if you can't use a whip properly. But learning how to use a whip and how to set all variables in the Bigger Picture right might be a more useful and helpful option in the long run when you want to do ST with your horse at liberty ;)

Jump on over to my free training were you get a three-step process for implementing Straightness Training in your training sessions right now. Watch two videos and download your free eBook about the ST Exercises which will help you put the information into action right away: