Burrhus Frederic Skinner (1904 – 1990), a professor of psychology at Harvard University, created the term “operant conditioning” in the 1930s.

Because of this, animal trainers have been around for centuries, and they have always been effective in teaching animals from different species: 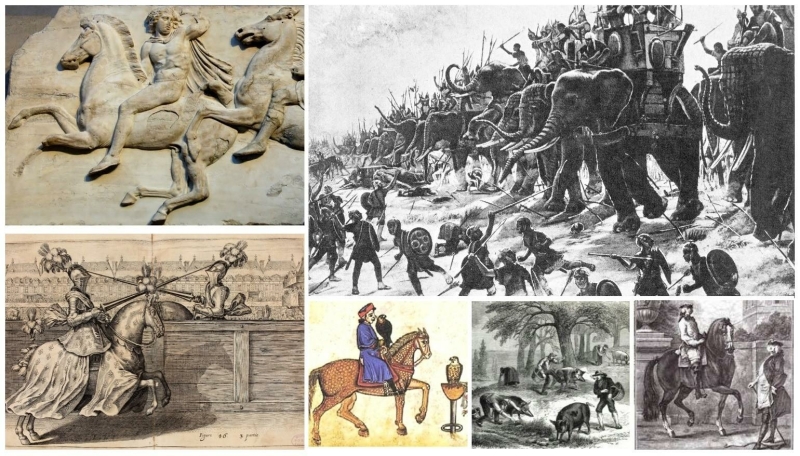 And he did codify the basic principals.

The Basic Principles of Operant Conditioning 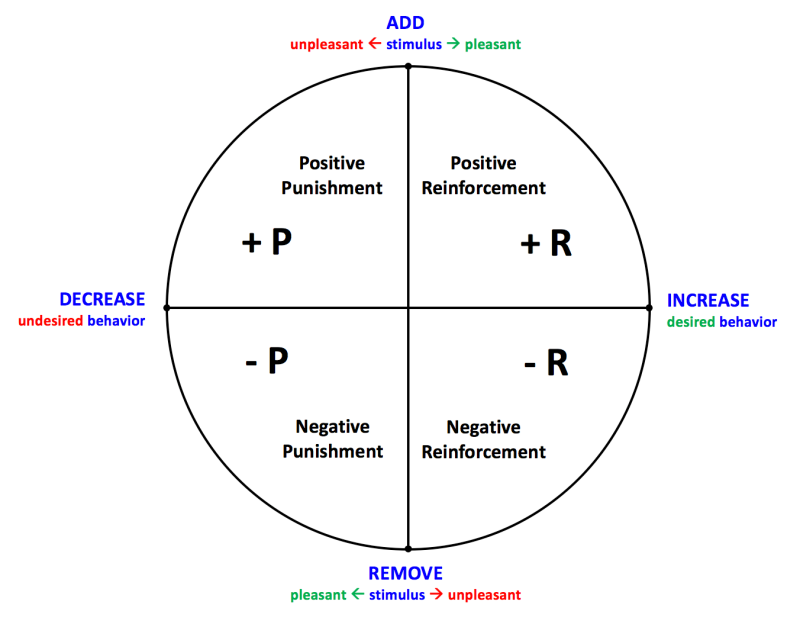 Operant conditioning is learning from consequences.

An animal learns, “when I do this, it has consequence XYZ”, where XYZ, for example, is delivery of food, or the arrival of electric current, or the removal of electric current, or the addition or removal of other desired or undesired stimuli. Behavior that is followed by pleasant consequences is likely to be repeated, and behavior followed by unpleasant consequences is less likely to be repeated.

There are four types of consequences in operant conditioning.

These types are placed into two categories: reinforcement and punishment.

So reinforcement and punishment can be used as strategies to motivate an animal to do or not do certain behavior.

In these categories, a stimulus can be added (positive) or removed (negative).

Note that the terms positive and negative are about adding and removing, so they have nothing to do with being kind or not kind.

And the term aversive is about causing avoidance, and punishment is about decreasing behavior such that it is less likely to occurs in the future. It says nothing about being scary, painful, or aggressive.

Operant Conditioning in the Skinner Box

Skinner developed the model of operant conditioning by doing thousands of experiments with rats and pigeons.

In the Skinner Box, the computer-controlled operant conditioning was invented to produce animal behavior on purpose.

The experiments in the Skinner Boxes were done to prove that behavior would be repeated by a rat or pigeon when motivated in one of the four ways:

Note that I am aware that this article can easily start a discussion about what is morally and ethically “right” and what is “wrong, and whether or not Skinner boxes are cruel or not, but let’s not go there.

The reason why I post the videos here is because there are a lot of Skinner-based training methods nowadays, for example, clicker training.

Also, people who embrace the “+R only” or “all-positive” perspective use the “positive” bias (in the meaning of “nice”) of the Skinnerian ideology.

And the mainstream behaviorists of today have followed the Skinnerian path, so it’s good to know more about their source:

Rats and pigeons where used in experiments to collect data.

To be able to make scientific conclusions, it was important that all experiments and research were repeatable. 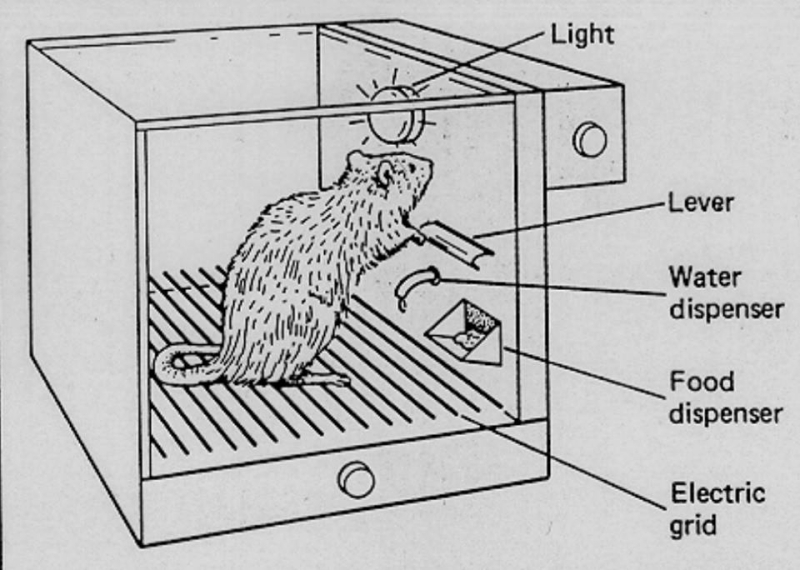 That’s why the whole setting of the operant conditioning experiments in the Skinner Box was standardized and computer-controlled to avoid uncertainty:

+R and the Skinner Box

+R is the abbreviation for positive reinforcement and is about getting desired behavior through the addition of a pleasant stimulus.

The Skinner Box was used to teach, for example, a pigeon how to peck a colored disc. The pigeon learned that picking the disc would produce the reward.

To sum up the key elements of +R in this experiment:

To test +R, the pigeon was kept on ¾ of its normal weight, so the birds were always hungry when subjected to a pleasant stimulus.

At first, the pigeon would peck the disc accidentally, but it didn’t take long to learn that the disc represented a means and a resource to obtain the food.

The consequence of receiving the pleasant stimulus for disc pecking ensured that the pigeon would repeat the desired behavior.

Skinner initially used a continuous reinforcement schedule, which means that reinforcement (food) was delivered after every time the pigeon pecked the disc.

Check out this video for more details:

-R and the Skinner Box

-R is the abbreviation for negative reinforcement and is about getting desired behavior through the removal of an unpleasant stimulus.

The Skinner Box was used to teach, for example, rats how to push a lever. The rat learned that by pressing the lever, the electric current switched off, so the aversive stimulus was removed.

To sum up the key elements of –R in this experiment: 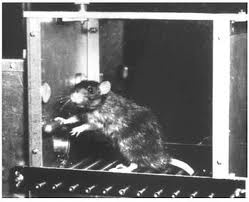 Initially, the rat would press the lever accidentally, and this way, he found out that pressing the lever would switch off the electric current. The consequence of escaping the aversive stimulus ensured that the rat would repeat the action of lever pressing.

Subsequently, in the process of -R, a light would be switched on, just before the electric current. This way, the light was negatively reinforced, and the rat would press the lever once the light would switch on. In other words, when the light flashed – the conditioned reinforcer–  the rat could avoid the shock – the primary reinforcer – by performing the desired behavior: pressing the lever.

+P and the Skinner Box

+P is the abbreviation for positive punishment and is about stopping undesired behavior through the addition of an unpleasant stimulus.

For example, a rat in a Skinner’s box that should learn to avoid the lever was given positive punishment by having an electric current turned on if the rat pressed the lever.

To sum up the key elements of +P in this experiment:

-P and the Skinner Box

-P is the abbreviation for negative punishment and is about stopping undesired behavior through the removal of a pleasant stimulus.

For example, a rat in a Skinner box that had its heat turned off when it pressed the lever would be receiving negative punishment, and should learn to avoid the lever.

To sum up the key elements of –P in this experiment:

The Computer Is Always Effective & Efficient

That’s because the computer is always effective in creating and stopping behavior in a controlled Skinner Box,

A machine is always doing the right things scientifically seen:

Besides that, computers are also efficient.

With efficient, well-timed and well-dosed stimuli, each animal will learn that “what I do” has a consequence. 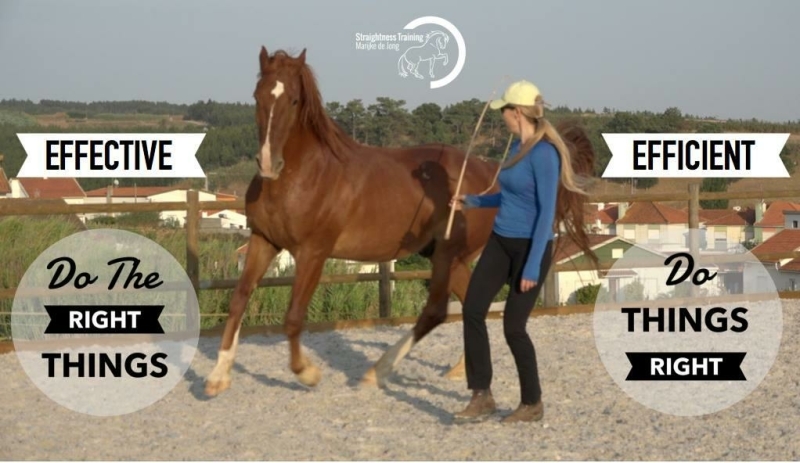 Now a Skinner computer is always efficient and effective, but it’s not computers who train horses.

And they are not always doing things right!

And they are not always doing the right things!

More about this in the article:

The Computer Is Always Aversive

In Skinner’s +P and –R experiments, the computer and its stimuli were always aversive.

In the Skinner Boxes, the aversive stimuli, such as the electric current, were always perceived by the animal as unpleasant, undesired, painful or scary.

So the intention with the electric current was being aversive and the horse’s perception about it was that it was aversive.

That’s why nowadays a lot of people make the assumption that:

However, when people train horses, both punishment (+P) and reinforcement (-R) doesn’t have to be aversive or unpleasant.

So in a human-horse situation: 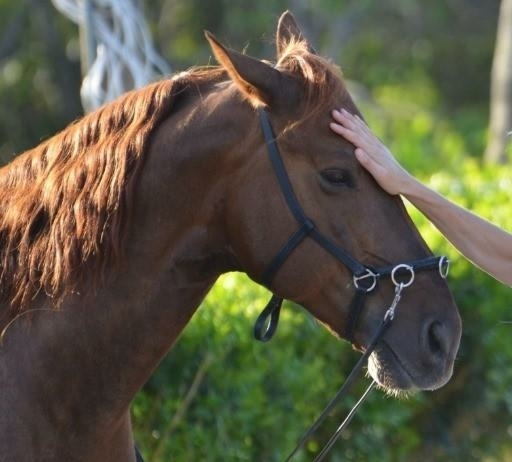 And to make it even more interesting:

So we need to be aware of that:

The fundament of science-based operant conditioning is the “scan & capture” technique.

B.F. Skinner invented the mechanically-based operant conditioning, and he taught the basics to his two young assistants, Keller and Marian Breland.

The Brelands helped Skinner to train thousands of rats and pigeons used in various experiments, using the scan & capture technique.

Now with the scan & capture technique, the computer is not influencing the animal in advance.

Initially, no stimulus is used to cause behavior, so it’s about waiting until the animal starts to offer the desired behavior.

In other words, there are no stimuli used BEFORE behavior, only AFTER. 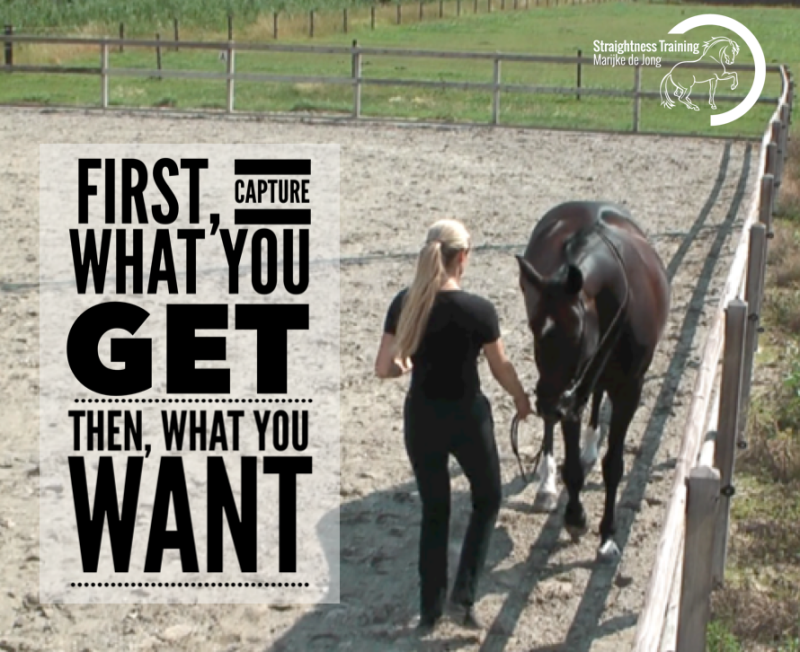 This is how it works:

In other words, the scan & capture technique doesn’t use aids, cues, commands, triggers, tools, or whatever to cause the behavior to occur.

It’s a technique that only uses stimuli AFTER behavior occurs to reinforce or punish this behavior.

This means, that the scan & capture technique in Skinner Boxes contained the following “two-step” format:

In 1943, when Marian was 23 years old, the Brelands discovered this concept of “shaping”.

They proved that a pigeon could learn more complicated behaviors, such as making a full turn, through shaping.

Shaping behavior is about capturing what you get instead of what you want.

So instead of waiting all day for an animal to perform a behavior and then capturing it with a reward, the Brelands began rewarding the slightest try in the right direction with a hand-held food-delivery switch.

This way, a behavior could be gradually “shaped” into the complete desired behavior.

Check out this video to see the process in action:

The individual shaping of a response appeared to be a powerful non-forceful technique.

At the start of the Skinner experiments, only primary reinforcers and primary punishers where used, the so-called “unconditioned” stimuli:

Since the animal does not need to be conditioned to like or dislike these stimuli they are known as “primary” reinforcers and punishers.

But in 1945, while shaping the tricks, the Brelands discovered the concept of “secondary reinforcers”. 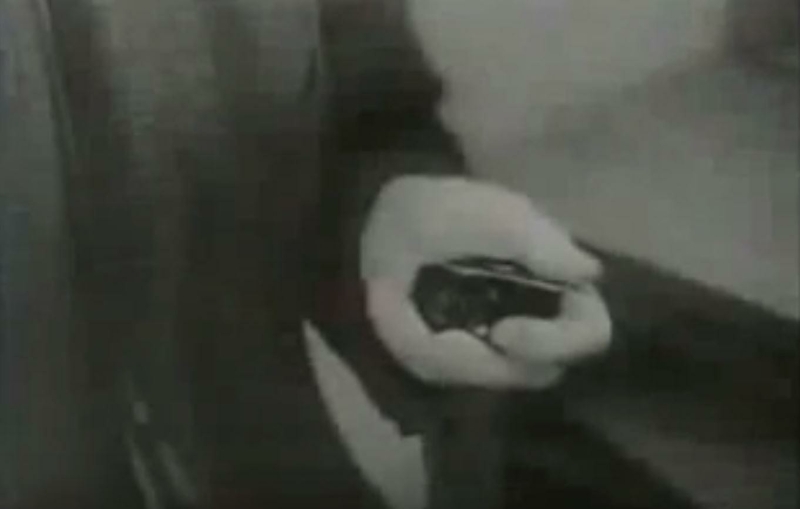 In the process of shaping, they noticed that the animals seemed to be paying attention to the noises made by the hand-held food-switches.

This is a typical form of classical conditioning, which is a more passive form of learning and associative learning.

The Brelands realized that the noise was an important part of the training process itself, and discovered that a sound could communicate to the animal the exact action being rewarded.

So the Brelands where the pioneer of the use of an acoustic secondary reinforcer and the “bridging stimulus” was born.

Using a bridge has been popularized through clicker training in the 1990s, but already in 1945 the Brelands used it to improve timing and to teach animals at a distance:

Already in the 1960s, the Brelands gained experience with the “failure” of reward-based operant conditioning, and they discovered that every species is receptive to what they called the “instinctive drift”. 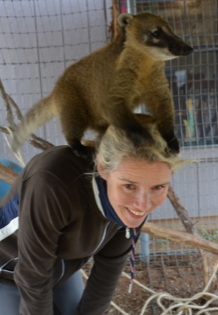 The concept of instinctive drift originated when the Brelands taught raccoons to deposit coins into a bank slot.

The raccoons were initially successful at this activity but over time began to dip the coins in and out and rub them together rather than drop them in.

Now in nature, raccoons instinctively dip their food into water several times and rub it in order to wash it. Therefore, the adoption of this behavior with coins is instinctual drift.

The raccoons learned the “trick” but then began to drift away from the learned behavior towards more instinctive behavior.

Instinctive behavior isn’t learned.  Instead, it’s a natural reaction which often is preferred by the animal over learned and unnatural actions.

So the instinctive drift went against Skinner’s primary rule: Reinforce a behavior and you get more of it.

The raccoons showed that that was just not true. The moment instinct takes over, the raccoon will break the “law” of positive reinforcement.

This also happened when the Brelands trained pigs, chickens and other animals. The scientific “absolute truth” fell apart when put to the test in the real world of Mother Nature.

The Brelands found out that when the instinctive drift comes in, any animal, of any species revert to innate, unreinforced, unconscious, unplanned, and automatic behavior that interferes with operant conditioning and override trained behaviors.

This doesn’t mean we should abandon operant conditioning when training our horse, but we should be aware of species differences.

Scientific study of rats and pigeons in Skinner Boxes and science-based operant conditioning won’t give us ALL necessary information and concepts to train our horses.

More about this in the next article:

Links to Relevant and Recommended Articles: