STart HERE
Why ST?
ST Academy
Marijke de Jong
Inspiration
Weekly ST
STories
STudy
Blog
Free eBook
In this article
Table of contents
Articles in this category
The 7 Mental States of the Horse
The brain of the horse
How Horses Learn
4 Ways To Motivate Your Horse and the 5R Formula
Home
The Horse
Mind
How Horses Learn

To be successful with Straightness Training we have to know how horses learn.

A horse learns in several ways, such as:

Below I will discuss these ways of learning briefly. 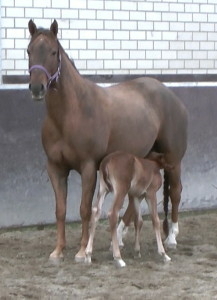 Without any formal training a foal will learn the basics that are necessary to survive. In the first hours of its life, a foal learns the basic instinctual life skills:

In the first 24 hours of life, the hard disk of a foal is ”open” to record all the information needed. That is necessary because horses in the wild are prey animals and a foal should be able to immediately run with the herd after birth. 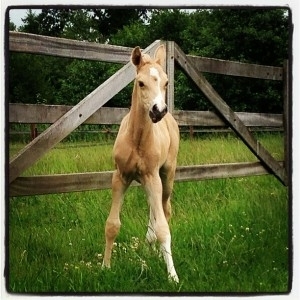 Also by simply observing the environment, a young horse learns more about recognizing food and danger.

This is also called observational learning.

Later on the foal naturally learns to make connections between different stimuli (stimulus A means no risk, stimulus B means danger, etc.). He learns to familiarize himself with his environment, including blowers, dogs, garbage bins, cars, inside a trailer, a wooden floor, gravel, water, etc.

This is called latent learning. What a horse has already seen as foal under good circumstances and with positive experiences, he will be less scared of as an adult horse. 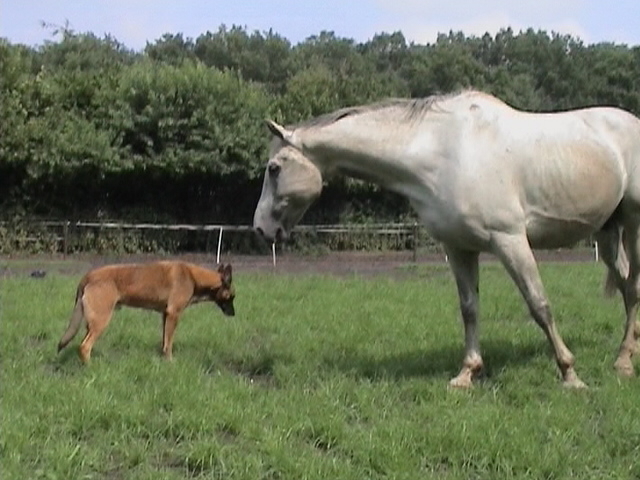 The influence of the social environment is crucial for young animals. A young horse must learn from other horses. He must learn the social skills and the right manners. This is also called social learning.

The young horse learns his social skills by deliberately going too far while playing. The adults within the herd will automatically and consistently deal with any unruly behavior.

High speed and quick reactions that are necessary for surviving, the horse can learn the best from his counterparts. A slow response means that there is a possibility that you will not survive. No human can teach them as well and some hrses that have been in close contact with humans during their first three years of life ban be a lot slower in reacting to stimulus.

Isolation of a foal can cause traumatic effects just as it can with children. If a horse grows up in a pasture with only his mother to play with during his first three years, then this horse will not learn social skills as well as a horse that grows up with a herd.

By habituation the horse will learn that a stimulus is irrelevant, and learns to reduce and finally lose his flight response. Habituation is a form of learning in which the horse is repeatedly confronted with a stimulus with the intent that his (flight) response to this stimulus will decrease over time.

Here is an example of habituation to an audible and visual stimulus: 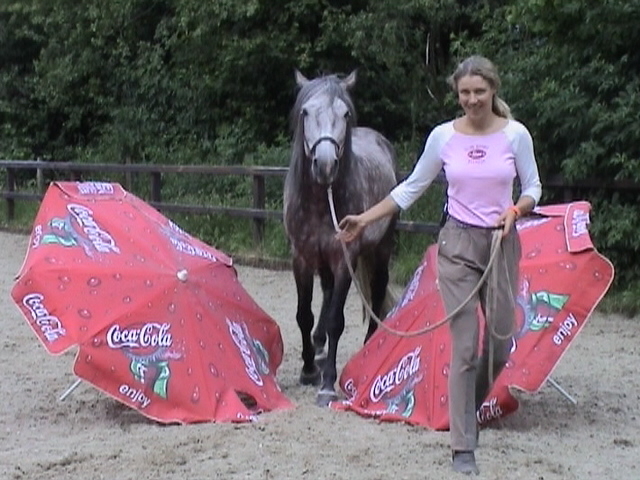 It is important that a horse learns to adapt his behavior to the environment and that he learns to ignore meaningless stimuli. Otherwise he would waste too much energy as he goes through life, because every unnecessary fright caused by a meaningless stimulation requires energy (adrenaline production, heart rate raises, breathing speeds up, etc.).

Other audible, visual and tactile sensations which a horse can get used to are:

Once a horse is used to tractors, then perhaps he starts to think that trucks are no longer scary and he categorizes these objects under “non-dangerous”. This is called “generalization“.

Another form of learning is ‘conditioning’. Classical conditioning is about learning by association, so it’s a form of associated learning.

In this type of learning the horse realizes and learns that “This means that”. 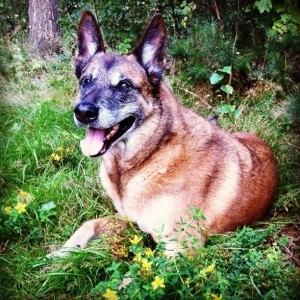 The Pavlovian Reflex is well known: when the dogs heard the bell ringing, they started drooling as they knew the bell was associated with food.

So therefore you can teach a horse certain voice commands and voice, whip and body cues. 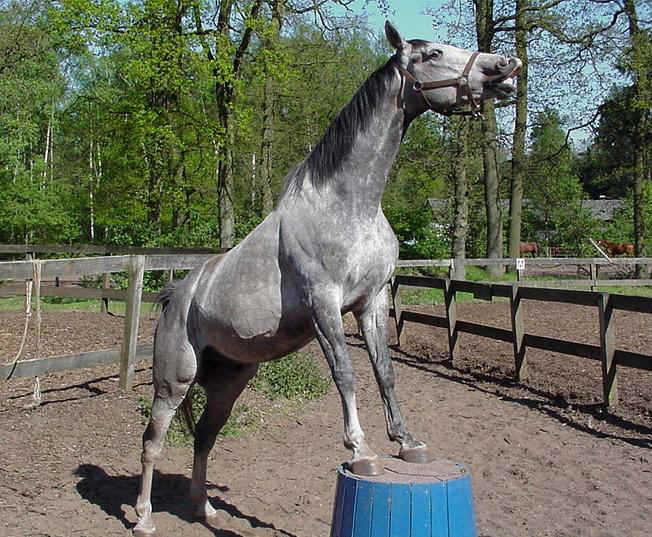 Operant conditioning is about learning by consequence, so it’s a form of ’cause & effect’ learning.

In this type of learning the horse realizes and learns that “When I do this, this happens”.

In this form of conditioning the horse will establish a connection between:

Operant Conditioning works with reinforcement but can also work with correction (punishment).

The word ’’operant’’ means that a certain behavior deviating from the normal behavior repertoire is going to be conditioned.

From a schematic point of view, operant conditioning comes down to the following:

Extreme dedication to one approach 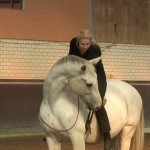 Now some riders are completely against punishment. Some even reject any form of pressure and only wants to work with positive reinforcement, and stick to this approach only.

On the other hand there are riders who are very much against the use of treats, and mainly rely on the ‘pressure/release’ techniques, i.e. negative reinforcement and positive correction.

Extreme dedication to a single approach ignores the benefits of the other approaches. So in ST we prefer not to only 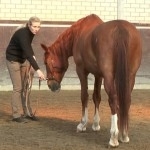 have a hammer in our tool kit, so to speak. Having the flexibility of choosing the appropriate tool (approach) out of our tool chest leads us to tailor made teaching, which is necessary, because every horse is unique.

And some approaches won’t be useful in specific situations, for example once you end up in a very stressful situation. Then treats don’t work anymore, because in a state of fear, food is not interesting for a horse.

Another aspect that riders choose for a certain approach is because of the ‘words’. Words are only symbols to define something, but some riders feel uncomfortable with the use of words such as ‘pressure’ and ‘punishment”. The association we as human have with certain words is based on our past experiences, on our beliefs, and on our perceptions of the world. We have to respect these views, however it seems more of a ‘word choice’ or semantic discussion, than a practical one. You could also replace the word ‘punishment’ for ‘correction’, and ‘pressure’ for ‘signal’ or ‘trigger’; We could still speak about the same approach, only using different words.

And there are interesting phenomena going on when it comes to training horses:

It’s best to avoid extremes and to stay on a continum. In nature things are never static, everything is dynamic. We need to have the dynamic ability to go from +R, to -R, to say ‘no’ (+P) and to take away the treat (-P) , we need to feel free on the entire spectrum so we can choose the approach that suits the situation, the type of behavior and the personality of the horse best. Only then we can achieve the results we are looking for: a straightened and balanced horse in all areas: physical, mental, emotional and spiritual.

So in ST we prefer ‘situational teaching’, so we can choose the approach that works best for the horse in the given situation at a certain moment in time.

So in ST we prefer to have all tools in our tool kit, and we choose the strategy that suits the situation, the type of behavior and the personality of the horse best. There is not single right way that suits every horse.

Now in ST almost all training is accomplished through positive and negative reinforcement.

And we hardly need to go in the house of punishment, because we also use ‘repetition‘ as a motivation strategy, because repetition is the mother of all skill. So the better the horse will be in a certain behavior, the more likely that it will increase the frequency that the horse will do this behavior. Repetition creates good and positive habits. So behavior that has been rehearsed is always likely to occur again.

Every Approach can be Used and Misused 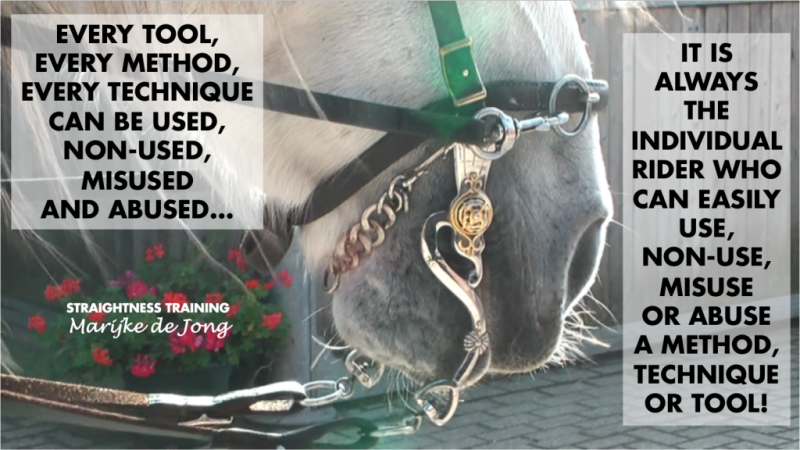 Even the ‘best’ approach / strategy / technique / method / concept / tool can lead to a drama when used poorly!

So as we have seen, even positive reinforcement can lead to a complete disaster when used poorly… horses can start to act acting like a soldier or robot, or they might start to beg because of the treats and this might even lead to biting and kicking!