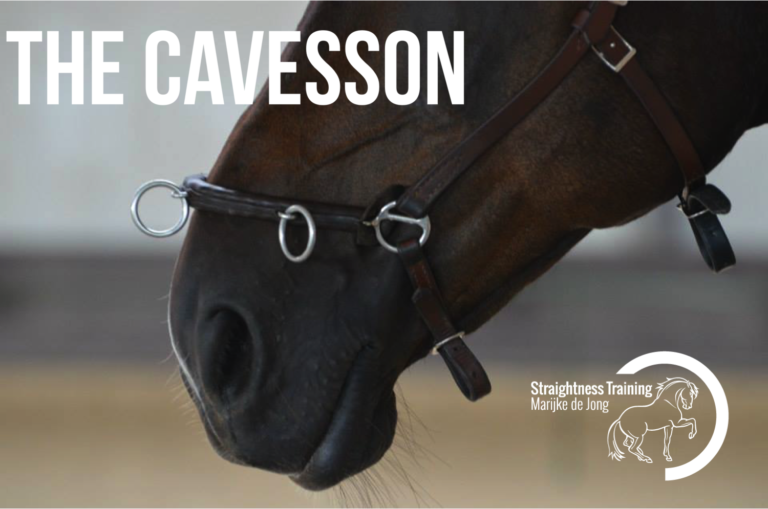 The cavesson is the ultimate tool to help us with Straightness Training.

We use it to gymnastize our horse in groundwork, longeing, work in hand and riding.

The cavesson has been invented to teach our horse to bend, halt, place the head and hindquarters correctly, and to make the body and limbs supple and flexible, without harming the mouth. 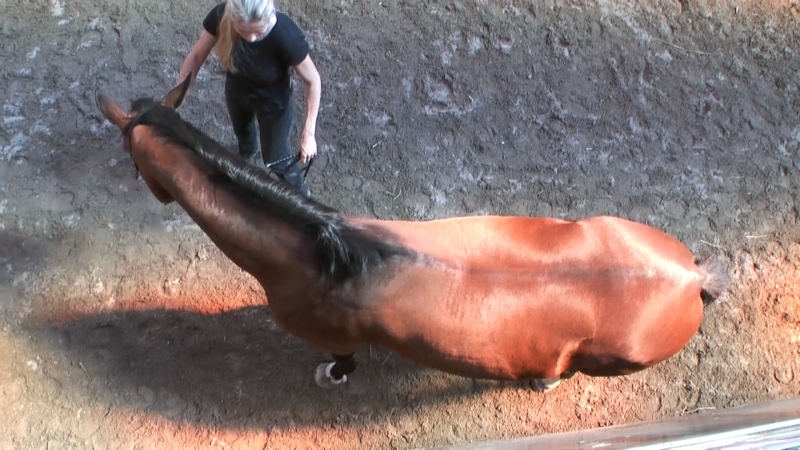 When using a cavesson, it is possible to bend the horse laterally through the entire body, from head to tail. This lateral bending in the body concerns the whole body. It is a collective name that we use in Straightness Training for everything that happens in the horse’s whole body – muscles, legs, spine, bending, rotation, flexion – to gain the ability to bend with the arc of the circle in both directions and to allow the body to do lateral movements. This ‘lateral bending’ is a metaphor, a figure of speech, because all factors together will create the illusion of lateral bending the body. (Here you can read more about this metaphor » )

The lateral bending in the body is required in all Straightness Training exercises. 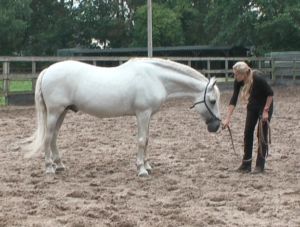 The cavesson also help us to develop the forward-down tendency in head and neck – first at a standstill, later on, in movement.

This is important to relax body and mind, and to stretch the topline muscles.

We often receive questions about the cavesson.

So let’s take a look at some of those questions – and the answers:

Onward to the answers:

1. What Are The Benefits?

The cavesson was invented to teach the horse all gymnastics, without disturbing the mouth. The young or crooked horse is not used to bend its body and will constantly try to move with its body straight instead of bent.  Using the cavesson makes the horse much more supple in its body. You can place the skull precisely in stelling and this improves a proper bend through the body.

The cavesson is easy to integrate into a bridle with a bit. When making the transition from cavesson to a bit, the horse will react lightly and attentively to the effect of the bit and will be easier in the hand. With the cavesson, mistakes that are made by previous riders using a bit can be easily corrected.

A cavesson is also a good alternative for riders who would like ride bitless. 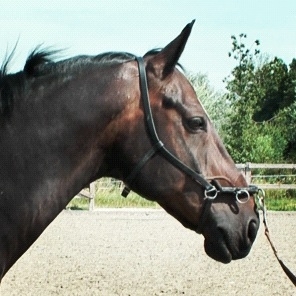 2. Who Invented The Cavesson?

Well, the cavesson has been used for centuries to train horses and many riding masters wrote about the cavesson in their books:

In his book, de la Broue states that the cavesson has been invented to:

Now, De la Broue wrote that the inside of the horse’s mouth is more sensitive than its nose.

And by educating the horse on the cavesson first, it will react more attentively on the effects of the bit once the cavesson is taken away.

So the result is a horse that is lighter in the hand.

William Cavendish, the Duke of Newcastle, had been educated by his father, Sir Charles Cavendish, to be the best fencing and horse riding instructor in England.

William spent 15 years as a teacher at a riding school in Antwerp (around 1645). He then came back to England and was given the title of Duke of Newcastle.

According to the Duke, the cavesson is used for the following:

According to the Duke of Newcastle, the horse will be towards the bit in a better way and will respond to all the demands of the rider’s hand if it has been educated on the cavesson in the first place.

He said: “A horse that has not been trained on the cavesson will never give a fine, light contact a good horse should give and when the rider works only on the bit, he can easily make mistakes.”

Robichon de la Guérinière is seen as a genius of the art of riding and outshined many of his predecessors.

During the first training of a green horse, Guérinière did not use a snaffle but he used a cavesson instead.

In his book Das Gymnasium des Pferdes, Steinbrecht is very positive about the cavesson.

He states that, by using the cavesson, the horse becomes flexible in his body and limbs.

With the cavesson, mistakes made by other riders using a snaffle can also be repaired.

According to Steinbrecht, this tool not only leaves the mouth completely intact but therefore also secures the needed yield of the neck more surely than the snaffle does.

Because the muscles of the neck go over the poll and attach to the upper jaw, a horse on a snaffle can still very easily stiffen the muscles and be absolutely unyielding in its neck while its lower jaw yields to the pressure of the snaffle on the bars.

This wrong development can be solved by using the cavesson.

3. What Kind Of Cavesson Is Used When Doing ST? 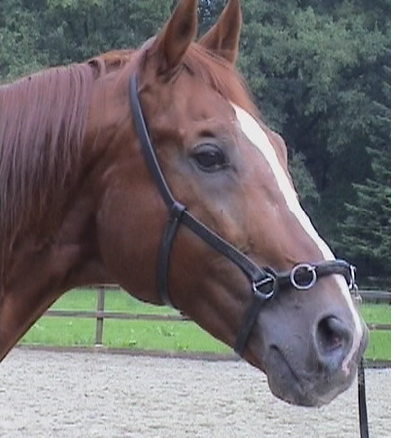 Well, in ST we prefer to use a cavesson with the following specifics:

4. What To Do If  My Horse Is Too Sensitive? 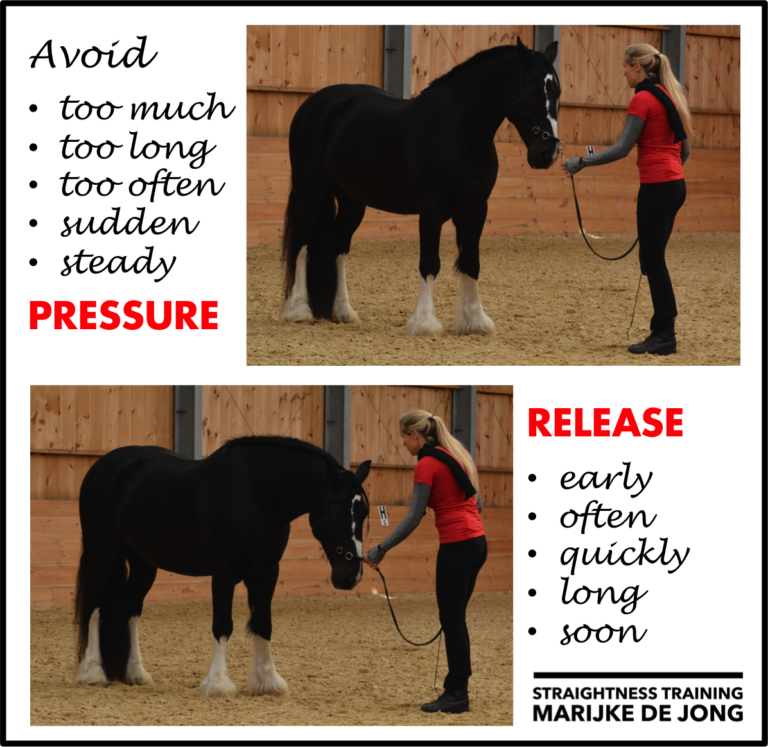 Now, when riders mention that a horse reacts too sensitive to the cavesson, they often start to ‘judge’ the iron chain in the noseband.

However, a cavesson that lays on the ground or is simply put the head of the horse won’t influence the horse.

You see, it only comes to life when we touch it.

And when we touch it with too much, sudden or steady pressure, the cavesson will be uncomfortable for any horse.

But so is a normal halter, when it’s used with too much, too long, too often, sudden, steady pressure!

So if we start to condemn a cavesson or its noseband we should look at ourselves first, because it’s always the human behind the tool!

It’s because of our lack of feel and lack of skill in the pressure/release technique.

So let’s improve our skills and learn to release early, often, quickly and long.

But here’s the thing.

Instead of improving our skills, we might look for the easier ‘solution’ and start using a cavesson without an iron chain.

And although we mean well, here we are solving the symptoms instead of the cause.

Because you see, a cavesson without an iron chain and with a wide noseband has a drawback:

Well, the band diffuses the pressure so it doesn’t matter so much if you use too much, too long, sudden or steady pressure.

This makes that you cannot work precisely, because the information you give diffuses and gets ‘blurry’.

You will be less crisp and clear in your communication when you use leather nosebands.

So don’t use an ‘avoidance strategy’ when you are not skilled at applying pressure/release, but work on refining your technique.

This way, you can communicate in a clear, but comfortable way.

5. How To Make The Cavesson Fit? 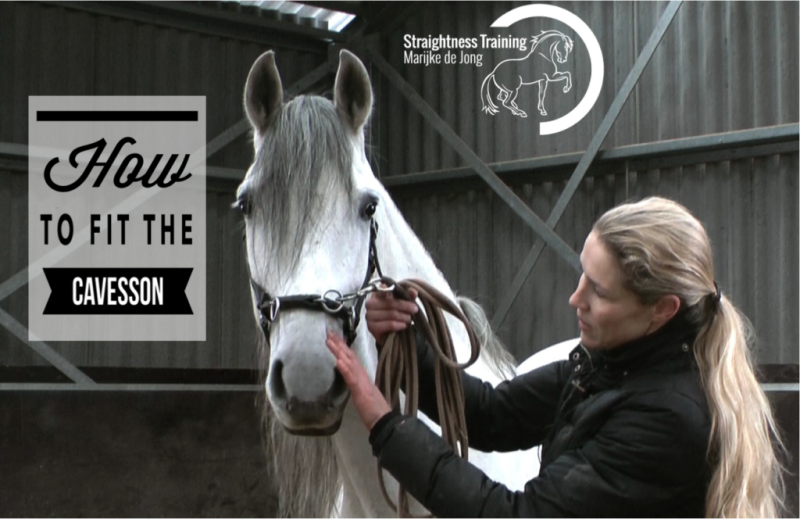 So it should be fitted in a way that it won’t twist, turn or ride up to the eye.

When it comes to the position of the noseband:

The further down the cavesson is positioned on the nose, the more precise and clear the actions.

Therefore, with riders who are not so sensitive with pressure/release and lack a bit in the timing and dosing, the noseband could be put somewhat higher. 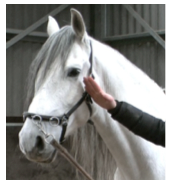 Take care, the noseband should not be too tight, but nevertheless tight enough so it does not slide over the nose during the training.

So the chin strap has to be fastened in a way that the cavesson lies snug around the nose, but not too tight, so the horse can still lick and chew:

Then, the throat latch has to be fastened tight enough to act as a stabilizer.

It should not be fastened like the throat latch of a bridle (fist between latch and jaw) but tighter, in order to keep the cheek pieces from getting in the eyes of the horse.

Place the throat latch below the eye of the horse.

6. How To Prevent The Throat Latch To Move?

The throat latch can move, so you can adjust the cavesson to the position of the eyes.

But if you want to have it fixed you can add an elastic band to avoid lowering of the strap during training. 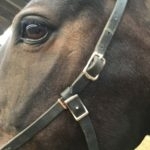 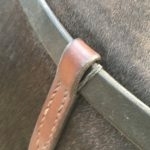 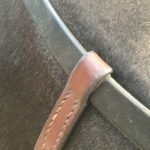 7. Where To Buy A Cavesson? 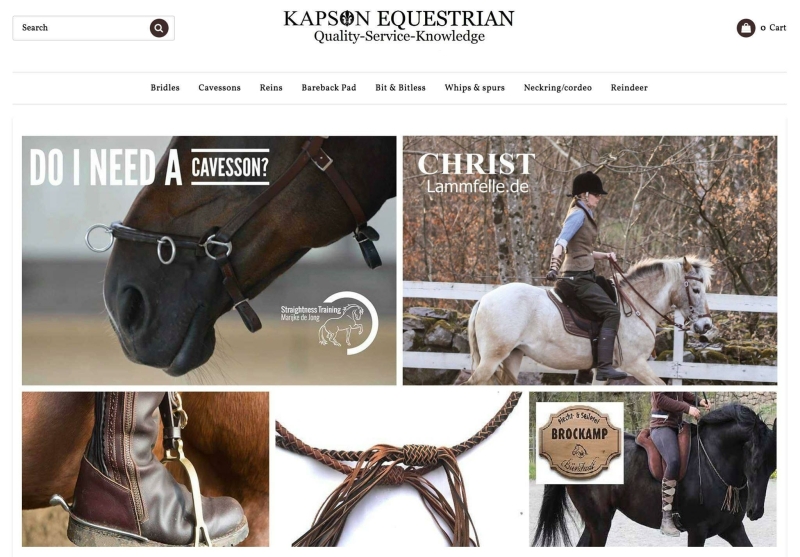